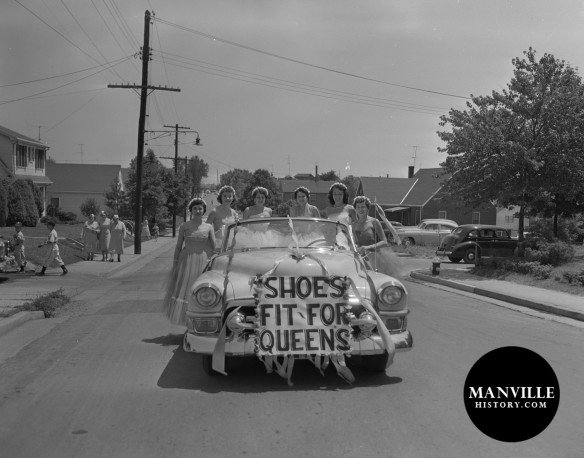 Hey everyone, I spent the day today scanning tons of negatives from the Manville Silver Jubilee festival… Manville’s 25th birthday celebration. I’m only about a third of the way there on getting them all done (there are a lot) But here is this great photo of the Family Shoe Store car getting ready to ride in the Silver Jubilee parade in 1954. I just thought this was a super cool photo, with really cool hand painted type on the flag! You guys deserve a Tuesday afternoon post… Also, SHOES FIT FOR QUEENS! This photo was taken by Neal Ranauro and will expand a couple of times if you click on it. Thanks again to the Manville Library for sharing it’s tremendous archive!

Hey folks. I just got finished scanning these Manville Movie Theater photos from the Manville Library Archive, which I thought you all might enjoy. All of these photos were taken by Neal Ranauro around 1954 and a couple of them have appeared on this blog before. These versions, however, are higher quality scans from the original negatives. They are huge and let’s be honest they are too awesome not to look at again. The Manville theater was in the same building that the massage parlor is on Main Street between Rosalie St. and Beekman St. You can recognize it from the weird rectangular shape on the front of the building, which is still currently there. All of the photos will enlarge twice if you click on them twice.

Please feel free to share these via social media, but please use the share buttons on the bottom of the posts so the the photos will link back to this site. It’s super important to establish this site as a trusted source of old Manville photos so people will submit more, and in turn I can share them all with you guys! In the meantime thanks for looking and stay tuned as I will be posting many many many more originally sourced photos in the near future!

Thanks again for the town of Manville and the folks over at the library for allowing me to digitally archive these, and literally thousands of other photos which I will be getting up here just as soon as I can get them all cropped and scanned.

Hey everyone. So I’m in the middle of digitally archiving lots of old “original manville residents” interviews. This one with Petery Semenick Sr. is absolutely incredible. Petey surely needs no introduction to Manville folks. For starters, he founded Petey’s bar & Casino, he was a fireman, founding member of the Rod & Gun Club, and original resident before Manville was even a real town. The interview was done by Stuart Crump, former Managing Editor of the Manville news back in March of 1979. Thanks to Petey Semenick Jr. for giving me his blessing on posting this, because it’s incredible.

Petey has a tremendous memory and his narrative of Manville history is amazing. I edited this a little bit, cutting out just the names, addresses, and really personal stuff thats really not anyones business. This interview is pretty long, but it’s a really great look at early Manville. He discusses early JM, Manville Farms, The Manville Gypsies (seriously!), the original Main St. buildings Elmcrest and Greaseheimer hotel (Chester House) Harmony Plains school, all of the Petey’s businesses, bootleg whiskey, the Rod and Gun Club, Fire Co. number 2, instructions on how to craft a baseball from scratch, the Manville Saw Mill (pictured in the video) and so many more random nuggets of great info. It’s totally worth a listen.

Hello everyone. I just wanted to pop on and say I’m still here! I have been super busy digitally archiving a lot of photos, which will be coming to the site soon. Meanwhile, here’s a cookie. It’s an odd photo that was taken by Neal Ranauro from the opening ceremony of the Main St. Underpass. The photo was taken off of the top of the underpass, facing the sunset, creating some eerie color and cool shadows. This photo is most enjoyable if you click on it a couple times to enlarge… it zooms in pretty close! You guys will be hearing a lot more from me soon so stay tuned… the posts will be glorious. 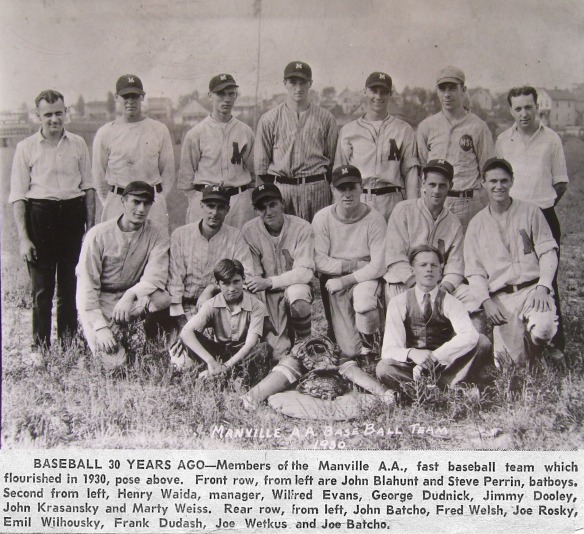 When I first started trying to sort out Manville’s history it became very obvious very early that sports were a big deal in town. In fact there are so many different baseball teams that it’s hard to even make sense of them all. Recently I was digitally archiving some taped interviews and I came across this 1985 interview of Manville businessman, and former Manager of the Manville Yellow jackets football team, Marty Weiss.

Marty was an original Manville guy with an extremely vivid memory, and I’ll probably end up posting the whole interview up here. For now though I want to focus on the sports segment, and how Josh Gibson and Satchel Paige both played baseball in Manville! If you are unfamiliar with those guys, we are talking about two of the best black baseball players to ever play the game, and the first 2 black players to be inducted in to the hall of fame.

In the past I have heard the the Black Yankees used to play Manville A.A. in baseball and I know Satchel played for them in 1941. Being that they were based out of Paterson, N.J. at the time it all adds up. Again I’m a huge baseball geek so this is yet another claim to fame, at least as far as I’m concerned for my little hometown. And by the way, in case you missed my 2010 post on our Manville guy that made it to the Major Leagues please see my post on Johnny ‘legs’ Welaj.

In the meantime though take a listen to this clip of Marty Weiss’s interview with Edward Purzycki back on 8-23-1985. He goes on to talk about his time coaching the Yellow Jackets football team and how he couldn’t keep those guys out of Petey’s Bar… which if you are unfamiliar with later became Gatto’s. Thanks to the Manville Public Library for this Gem. Here you go…

I spent the day today scanning some old negatives and came across this photo of the Main Street crossing right before they started work on the underpass in 1948. This photo is way more interesting if you click on it and enlarge. From this view you’d be standing on the tracks behind Johns Manville, or what is now the Manville Police station, looking towards the underpass. You can see the little booths and the old railroad gates that are now gone. We’ve seen other variations of this photo before, but the thing that really struck me about this photo was the building on the right which is the Chester House… before they put the brick addition on the front. Have a look… this photo will actually expand twice if you click on it.

Tommy from Chester House was recently telling me that he found a lot of old photos that he wanted to share on this site, and I imagine he will have much better looks at this, but this is a pretty rare and cool look at the original front porch and the way the building was originally designed.

I guess you would call this architectural style American Mansard which became popular in the Northeastern US in the mid 1800’s. This building also bears a striking architectural resemblance to the Elmcrest Inn. Which was an old, beautiful building on the current site of the Manville CVS, that was tragically and hurriedly torn down whilst Manville residents were trying to get it listed on the national historic register.

I wonder if they were designed by the same person, and I wonder if the Chester House ever had one of those cool little cupolas at the top!

If you pay attention to this blog, or have for a while you might know that I complain a lot about a lack of a proper historical archive in which residents have access to. Well there is good news… we’re building one. The good folks at the Manville Library have given me complete access to “anything and everything in the building” in the name of helping build a usable archive for the people. In fact they are sacrificing an entire room for it. They called the right guy… I spent the entire day on Friday digging through dusty boxes in the attic that haven’t been touched in decades.

As it turns out the archive is much, much more vast than I had imagined it would be. I am turning up chunks of Neal Ranauro’s elusive photo collection… a lot of which still has the negatives in tact. This is extremely good news… since it’s the best proper photo archive that I know of. Hopefully it’s all there. I’ve brought a slide scanner, digital camera, and laptop over there, and basically set up a fully functioning portable archiving system. We’ve also found a lot of 16mm film, so if there is anyone out there that has a working 16mm projector that the library can borrow briefly please contact me at Devildance@hotmail.com. These things aren’t getting any younger and I’d like to get them digitally archived as well.

While I was there former Mayor Joseph Patero (late 1960’s) showed up to thank me for spearheading the project. Turns out he grew up in Lost Valley and knew my grandfather well. Joe is an amazing and humble guy and we traded tons of old Manville stories for a good part of 2 hours. He told me about how the first few years of the town council minutes are recorded in Polish, and how the entire town bussed out to Yankees stadium to see Johnny “Legs” Welaj make his major league hometown debut. When he spoke of the the town then and now, there was still a fondness in his tone. He didn’t once tell me about how “the town is going to hell” which seems to be the popular rhetoric these days. He did however tell me about a MHS sophomore who received a summer scholarship to Cornell and how he planned on helping her. It was an awesome day and I think both Mr. Patero and I walked away with a renewed sense of community and pride. I liked that.

I know this isn’t a typical post for this site and I’m sorry it doesn’t include a bunch cool old photos, but I just wanted to thank the Manville Library for taking this step to honor the history of their town. For giving people access and a tangible glimpse into their great and storied past. Historical perspective always seems to me like good medicine for separated communities. I will try and keep everyone posted on the progress of what turns up!

Speaking of community Manville High School Sophmore Chelsea Phuangthong, who just won that summer scholarship to Cornell, could use some help financing her education. If you are interested in here story you can read about it HERE.